Located in the heart of the ancient city of Angkor Thom, the Bayon Temple is uniquely different from most Khmer temples because of no surrounding moat and walls with entrance gates. The Bayon is well-known for numerous huge stone faces of the Bodhisattva Avalokiteshvara sculpted on many towers which have become some of the most iconic and recognizable features associated with the ancient Khmer Kingdom and its architecture. 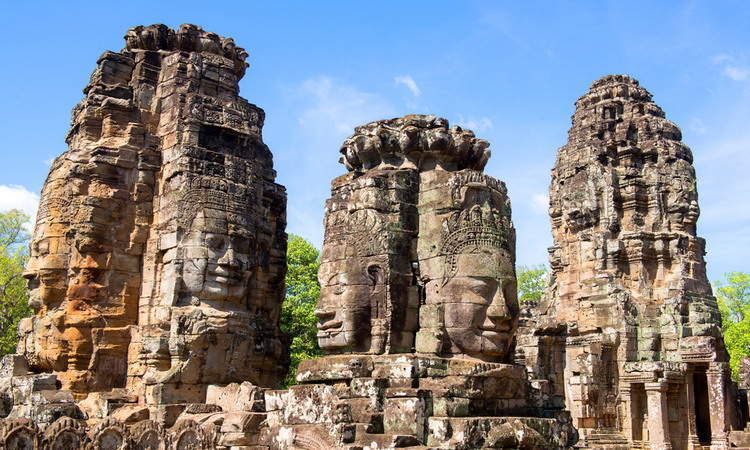 Built at the late 12th century, The Bayon was the state temple of King Jayavarman VII, the great Buddhist ruler. The Bayon was sometimes called Jayavarman’s Temple in honor of the Khmer King. Originally intended to be a Mahayana Buddhist Temple, it was the last state temple built in the Angkor complex and was constructed to represent Mount Meru, the center of the universe in Hindu and Buddhist cosmology. When the empire reverted back to Hinduism in the mid-13th century, the Bayon was altered into Hindu styles during the reign of King Jayavarman VIII before undergoing further modifications during the Theravada Buddhist Kings in later years.

There are some hypotheses about the tranquil faces of the Bayon among historians. Some believe that these faces are meant to represent the Bodhisattva of compassion known as Lokesvara. Others suppose that the faces are portraits of King Jayavarman VII because they do bear a striking similarity to other statues of the King. In addition, this Buddhist temple also were home to other Gods including separate shrines dedicated to Vishnu and Shiva and other worshipped deities. 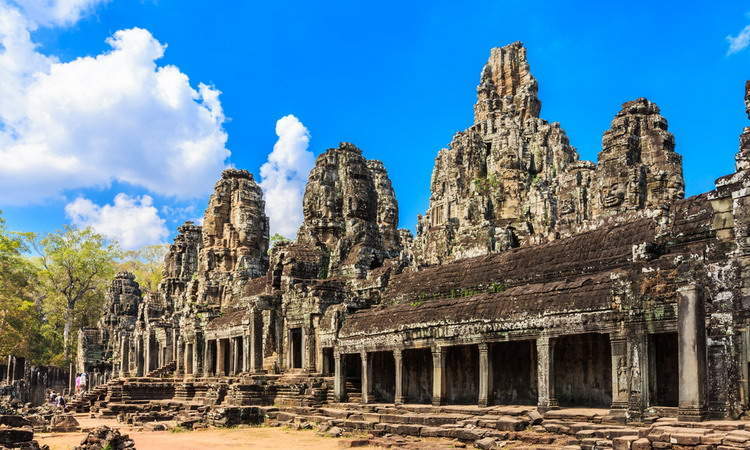 Standing right in the center of the walled city, Bayon Temple represents the intersection of the Earth and the Heaven. Exploring the Bayon can be tough on your knees because there’re lots of narrow corridors and steep flights of stairs forming the construction of around 40 remaining towers, over 200 serene faces and more than 11,000 figures of astonishing bas-relief carvings. The Bayon’s stone faces initially represented the faces of Lokeshvara, the Bodhisattva of compassion. Each face is facing one of the cardinal directions of the compass and showing serene smile with eyes closed, which indicates the state of inner peace and perhaps the state of Nirvana. 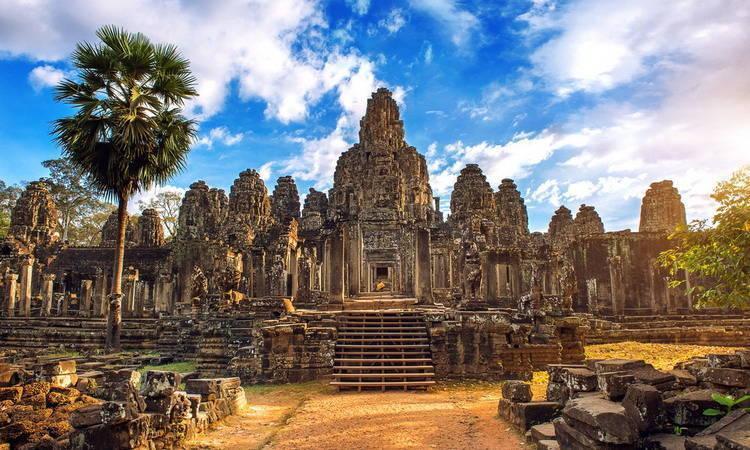 Scattering over 1.2 kilometers of exterior walls, the extraordinary collection of bas reliefs is gilded in an exquisitely sophisticated manner. Some of the bas reliefs are scenes from a sea battle between the Khmer and the Cham, while the others are extensive carvings of daily life including market scenes, religious rituals, cockfighting, chess games and childbirth.

Best Time to The Bayon

The best time to visit the Bayon Temple on the Cambodia Adventure Tours is during November to March when the weather is usually fair. Although for those that prefer the more peaceful time with the less tourists, October to November is certain to be a great time for a tour of this temple complex.

How to Get The Bayon

The journey to Bayon Temple is only about 10 km from Siem Reap, which makes it relatively easy to reach by car within 15 minutes, by tuk-tuk within 25 minutes, or by bicycle within 60 minutes. The preferred time to visit the Bayon Temple is in the afternoon to avoid a lot of the crowds. Plus, it also benefits to buy a Siem Reap tour guide to the fully appreciate what is on offer when visiting the local area.