Pristine beaches, rolling waves, luxury sea view hotels, chic resorts plus copious amounts of sunshine… that’s Da Nang for you, third largest city in Vietnam. It’s nice to spend a few days there relaxing on the beaches, as well as exploring nearby attractions and enjoying some Da Nang food, restaurants and nightlife. 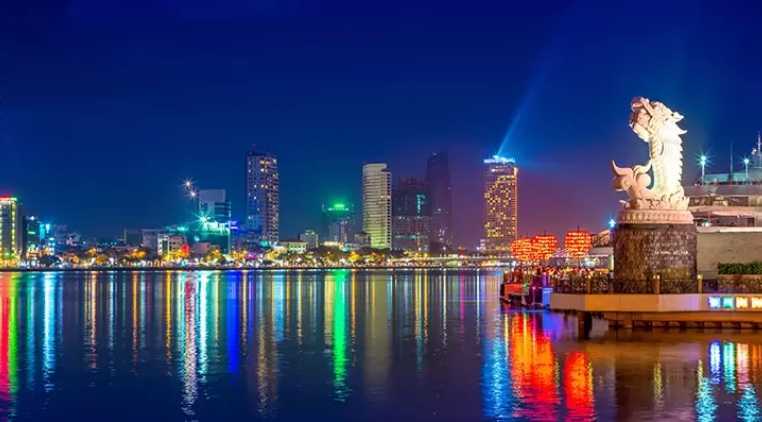 This newly popular destination lies in both sides of Han River with the population of 1.064 million (statistics in 2017). New York Times listed this city to one of 52 places you need to go in 2015 and mentioned as one of the top Vietnam attraction of Trip Advisor.

About internal flights within Vietnam, Danang is about an hour flight from Hanoi and the same distance from Ho Chi Minh City.

With a lots of airlines operate the direct flights to this beach city, it makes travelers very convenient to access Danang.

Discover Danang and please kindly check many activities visitors can do in Danang and surrounding areas.

Stretching over 60 km from Hai Van Pass to Non Nuoc, Danang’s beaches specially with their white silky sand were voted 01 in 06 most luxurious beaches on planet by Forbes Magazine.

My Khe beach and Pham Van Dong beach are the most popular with both locals and foreign visitors. They are idyllic beaches with smooth sand and a gentle slope. The beaches attract more than 785 hotels and resorts with the biggest worldwide brands, such as: Accor, Novotel, Marriott, InterContinental, Hilton, Sheraton, Pullman, Mercure, Melia, Hyatt, Sofitel, Wyndham … The best dishes in Da Nang utilize fresh seafood and various cuts of meat (and organs for the most adventurous of diners) as well as local herbs and greens, resulting in a myriad of colors and flavors that you won’t get anywhere else. As one of the most underrated cities in Vietnam, Da Nang offers a wide range of inexpensive yet unique dining options.

After many hours visiting Danang landscapes, don’t forget to enjoy the best dishes of Danang locals to complete your trip in this amazing city. But if you are unsure about local specialties, the recommended list below may be useful. Banh Beo is a heritage dish of central Vietnam; it is especially famous in Quang Nam and Da Nang, Hue Vietnam. Banh Beo Nhan Uot is explained as a typical style of Banh Beo in Danang which can be eaten straight from the bowl using a spoon. You can add some fish sauce or tangy chilli sauce to go with it. Banh Xeo is a crackling rice flour crepe filled with bean sprouts, shrimp, spring onions, and mung beans. One huge mouthful and you get a blast of flavors from the savouriness to sweetness, balanced with the secret sauce. Similar to Pho, Bun Bo is a much richer beef noodle soup in the central and south region. Rice noodles are usually tossed and drenched over the comforting beef broth and accompanied with different parts of beef such as rare steak, flank, tendon, meatballs etc. To make it easy, just order a “thập cẩm” which means one bowl with all of them. 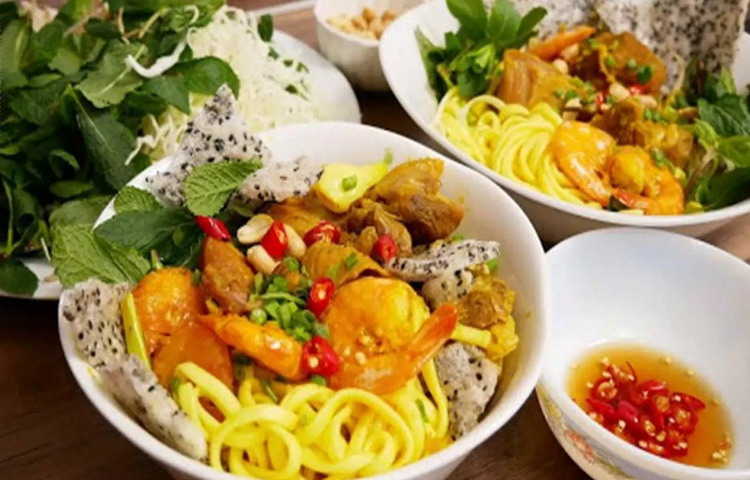 My Quang is an important dish for Da Nang and it’s not exactly a noodle soup, neither is it a salad. This dish is a combination of both, with chewy rice noodles, some broth, and choice of pork, shrimp or chicken. The pork is very tender and well marinated. Added into the bowl is raw peanut oil and cu nen, which is like garlic oil. You can pair the noodles with rice crackers, chilli and lemon. Just a noodle bowl but there is so much accompaniments! Made from common meat such as pork, this dish has gained a universal reputation in Da Nang and elsewhere in the country. To make the exact kind of roll, the pork chosen must have a balance between meat and fat. Boiled pork is sliced and placed onto the plate. Next, raw vegetables are prepared. They include cucumbers, perillas, lettuce, green bananas and other kinds of fresh veggies.

When making your own rolls, make sure that you eat them with the tasty sauce that can only be found in Quang Nam and Da Nang.  Even though the ingredients of the sauce (chilis, garlic and pineapple) are easy to recognize, no one can ever discover the secret ingredient of the local people to make this sauce. 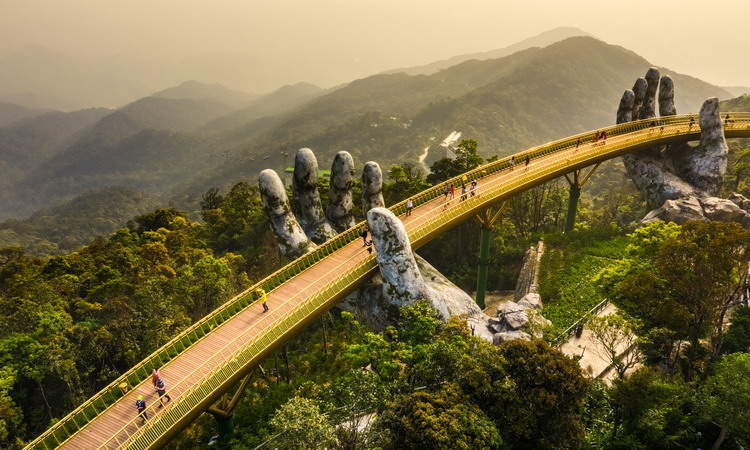 Ba Na Hills, 35 kilometers southeast from Da Nang, is a famous hill station and resort. Unlike normal stations built on the ground, Ba Na Hills is located 1,489 meters high on Nui Chua mountain. The station, founded in 1919, was advertised as “the Da Lat of Da Nang province”. Its investors, the French colonists, intended to build it as a leisure destination for French tourists.

There are lots of things to see in Ba Na Hills, but you should NEVER pass this place – the Golden Bridge. Located in Thien Thai garden, the Golden Bridge is regarded as the connection from this side of the station to the French village and the Le Jardin D’Amour flower garden. What impresses the travelers the most is the giant hand covered in moss lifting the bridge.

Other key sites will be also included in your ticket:

Just a short drive from Danang Airport to Cham Museum, you can spend 1 to 2 hours to know the great culture of the lost Champa Kingdom. The museum displays the masterpieces of Champa sculptures and all is about the Champa civilization from 7th -11th century. 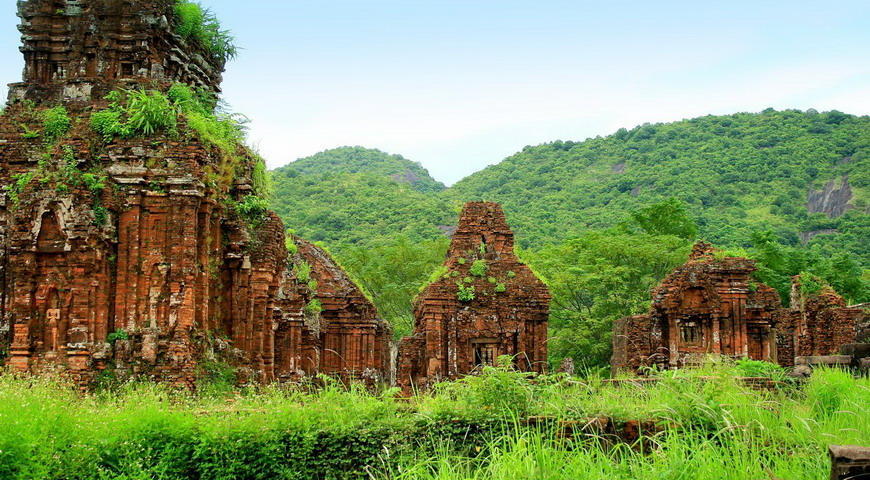 My Son Heritage Site is located in a narrow valley, surrounded by springs, mountains and green, dense jungle. It consists of several temples – towers constructed between 7th and 13th century AD.

After centuries of wars and numerous natural changes there are still about 70 monuments remaining, representing six styles of ancient Champa art. It contains evidence of cultural interactions between Champa Kingdom and other South East Asian civilizations, such as India and China.

My Son Holyland is located about an hour from Da Nang so you can leave Danang in the morning and comeback early in the afternoon.

Also called Ngu Hanh Son, Marble Mountains are a cluster of five hills, made out of limestone and marble. They are located 9 km of Da Nang and are a pilgrimage site with caves, temples, tunnels and peaks. In the past they were used as hiding places and important bases for the Vietnam revolutionaries. 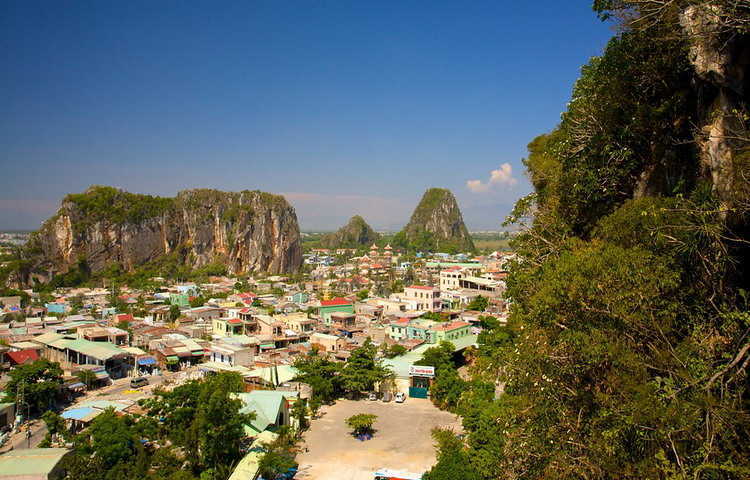 Among the five, Thuy Son – the mountain of water, is the highest one and also the main attraction. Almost all tourists come to Marble Mountains to climb Thuy Son. This mountain has many caves and Buddhist temples, many dating back to the 17th century. Climbing up about 150 stone steps from the foot of Thuy Son, one will reach the most beautiful observatory spot: the Riverview Tower or Vong Giang Tower in Vietnamese.

Non Nuoc village, famous for its stone carvings, lays at the foot of the mountains. In the past, rock was extracted directly from the Marble Mountains to make sculptures but now the direct extraction was made illegal. Materials for sculpturing work are now transported from nearby provinces like Quang Nam and Thanh Hoa.

Hoi An Old Town located 30km south of Danang City is used to be an international trade center by sea on the east area in the 16th and 17th centuries. It was the busiest trading port in Dang Trong region of Vietnam during the reign of Nguyen as merchants f-rom Japan, China, Portugal, Spain, Holland…often stopped over to exchange and purchase commodities. 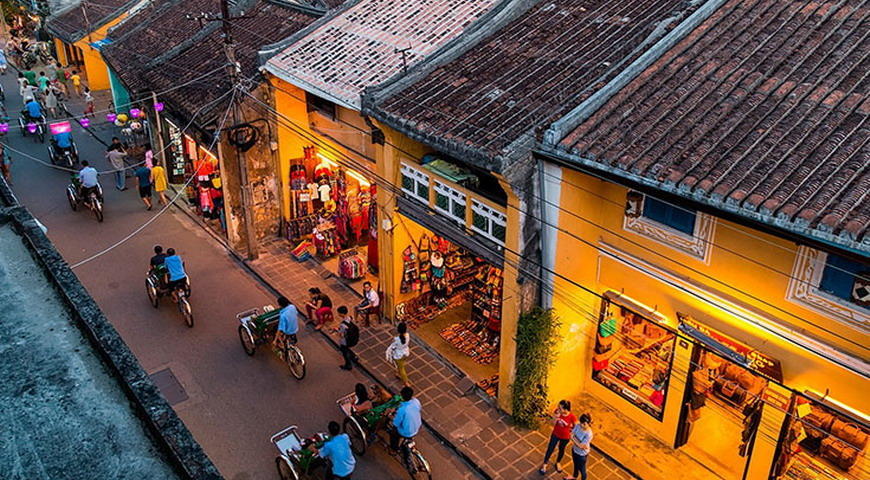 Let Vietnam Travel Tour escort you through the narrow lanes and streets of the old town, lined with centuries old shop houses combining the influences of the many trading communities who visited Hoi An: French, Japanese, Chinese. Their merchant vessels came to this trading center and brought their culture to enrich the diversity of Hoi An’s character as well as architecture. See the Japanese Covered Bridge, the gaudy interior of the Guangdong or Fukien Chinese Assembly Halls; take tea in an 18th Century home; jostle for space with the fish mongers in the lively riverside seafood market; cycle out to Cua Dai Beach or take a sunset river cruise – these are all parts of the unique Hoi An experience. 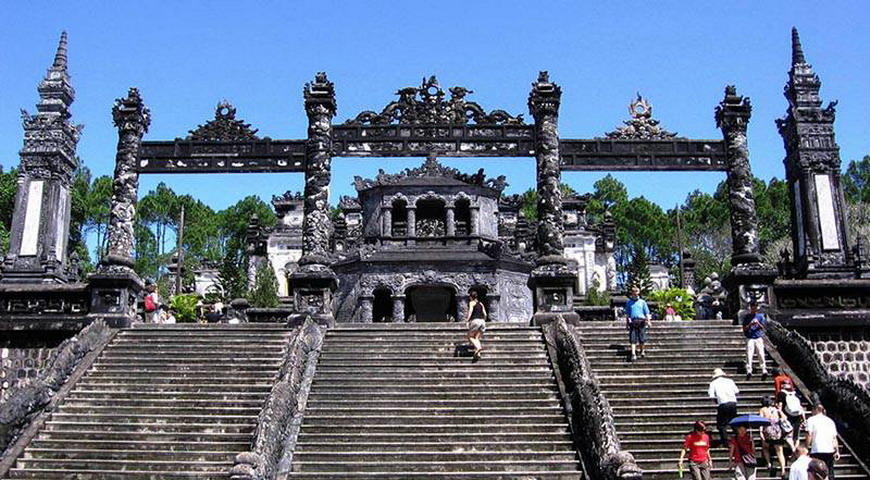 Just 3 hour drive from Danang, you can reach spectacular riverside Hue Citadel or Royal Palace of the Imperial City Hue which was set up by Nguyen Dynasty from 1805 to 1945. Such is Hue’s historical significance that it is recognized today as a World Cultural Heritage Site by UNESCO and captures much of tourists’ attention. How to get to Hoi An from Danang How to get to Hue from Danang Things to do in Danang, Vietnam

How to get to Vietnam Golden Bridge